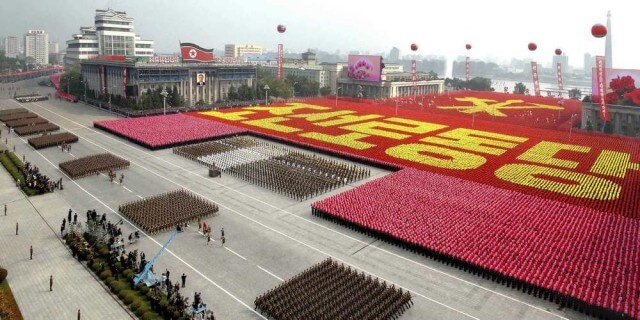 The North Korean leadership enjoys presenting a rosy picture of life in their closeted state and although hard facts are difficult to confirm, watching us, watching them, like in some kind of grim fandango setting, has at least opened up tiny cracks of light into this über Orwellian state. As we all know, North Korea is an anachronism which is in so many ways beyond words to describe. Largely regarded as an armistice without a peace treaty, the state of play in the Korean peninsula remains a dangerous enigma for all the wrong reasons, mainly in that both North and South Korea claim to be the legitimate government of the whole peninsula. It has always been notoriously difficult to see through the prism of North Korea and until the birth of the internet one had to rely on the first hand accounts of defectors and what could be gleaned from reliable newspaper reports. 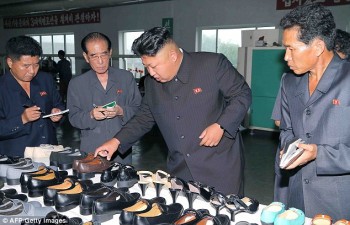 One of our greatest strengths is the ability to laugh at ourselves and thence to satirise others with parody pieces, whilst acknowledging the awful truth behind some of those veneers. Kim Yong-Un is for many, an ideal target for parody as was seen in The Interview which wasn’t received with much enthusiasm by the regime itself, responding to the film with an alleged hacking attack. North Korea is ripe for parody because what we see emanating from that country is so alien to what we, at least in most modern democracies, have become accustomed to. The Internet has thousands of pictures of Kim Yong-Un (also known to his subordinates as Dear Leader) looking at things and pointing at other things, whilst the yes-men who surround him scribble away furiously in their notebooks. One can only wonder what they write exactly, but one would hazard a guess that they would be writing in terms of wondrous endearment lest their notepads be inspected later, such is the total and absolute control of the state.

How to find news about North Korea 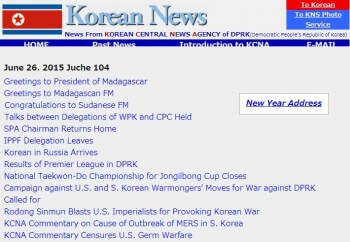 The Korean Central News Agency, as its name suggests, is the official news agency of North Korea and it’s worth reading for no other reason than getting a first hand idea of how that state views the world and the colourful language and bellicose attitude it unashamedly uses.

The whole world has to pool efforts to dismember the fatty monster U.S. imperialists. Rodong Sinmun

Whilst the KCNA is a little bereft in character and impartiality, Rodong Sinmun, which is the official newspaper of the Central Committee of the Workers’ Party of Korea, is a little easier on the eye and even has a special section entitled Supreme Leader’s Activities. For example, last week the Dear Leader attended the training of women fighter pilots and congratulated them for their skills. 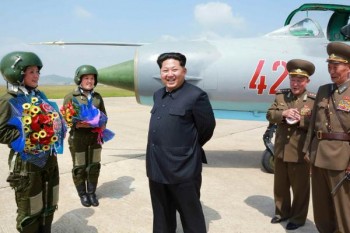 Seeing their solo flight with satisfaction, he said with pleasure that young girls are very admirable, they are flowers of the sky…..

A few days later the Supreme Commander could be seen inspecting the shiny new Pyongyang International Airport, accompanied by his wife Ri Sol-ju (or Lee Seol-ju) as they apparently handed out field guidance to all those they came across.

This visit was also reported in Rodong Sinmun in the Supreme Leader’s Activity section, which is brimmed with interesting reports of how the Dear Leader fills his busy days. It was also confirmed that the new airport would be opening on July 1st this year. 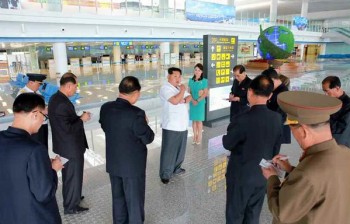 He noted with pleasure that the gatepost of the airport was erected in such way as to sustain the national character and the front and back of the terminal look very nice.

Further coverage of this event can be found in NKNews.org, with more pictures and comment.

There are numerous official North Korean information pages mostly dedicated to national celebrations of some form or other and of particular interest is Voice of Korea, which is kindly produced in numerous different languages, including English.

Of additional interest is the section for music and videos showing national anthems and orchestras adding greatly to the general flavour of life in North Korea. Definitely worth a visit.

How is North Korea reported on around the world?

As you would imagine, there’s a veritable smorgasbord of sources to choose from and much of it depends on which flavour meets your fancy and how gullible you are. It’s all too easy to be blythe and immature, not to mention sensationalist when reporting on news from North Korea and some rags, such as The Mail Online and Fox News revel in that kind of reporting and wouldn’t recognise satire if it jumped up and bit them in the ass. 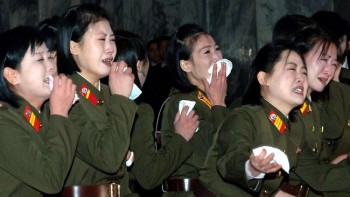 The above is one of many photos showing people crying very emotionally at the funeral of Kim Yong-Il which all give one the general message of the cult of personality, which is hard to deny, however this kind of hysterical behaviour is part of the Korean Confucian culture and is normal practice at such emotional events, I have since learned.

Many sensationalist stories published about the secretive state have subsequently been debunked, such as the reported execution in August 2013 by firing squad of Hyon Song-wo, a North Korean singer for allegedly appearing in pornographic videos. In May 2014 she was spotted on TV, which illustrates how easily rumours mushroom out of control. Another story on the savage death of Jang Sung-taek, a DPRK official and uncle of Kim Yong-Un accused of corruption who was reportedly fed to a pack of vicious, starving dogs was later retracted by many news outlets as were stories of Unicorn sightings and Kim Yong-Il’s five hole-in-ones (or was it ten?) on his very first round of golf.

Sources of information for North Korea

Moving on from the mainstream and more sensationalist news sites, others such as North Korea Tech offer a cooler and calmer approach to news from the DPRK and is clearly run by someone genuinely interested in observing North Korea from a more detached and objective stance. Fortunately the site is regularly updated and has some great links to YouTube, an entire North Korean website list as well as a list of other NK related sites, up to and including questions at US State Department briefings on North Korea. A very valuable resource and well worthwhile bookmarking. 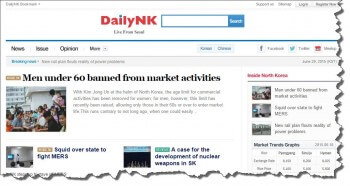 Daily NK appears to be an online news portal based in Seoul, South Korea and specialises in stories from the North which you are probably unlikely to find anywhere else, such as the state of the squid harvest and NK local elections in 2015. Also on offer are some in-depth opinion pieces and supposedly first hand reports from defectors. 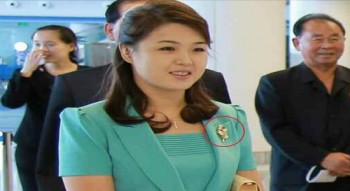 North Korea First Lady Ri Sol Ju appears to be wearing a rather flashy brooch in this picture, in place of the customary pin depicting both Kim Il-sung and Kim Yong-Il, which has caused quite a stir in the online press. Not only that, but she appears to be wearing a crucifix around her neck, although some eagle eye commentators claim it’s just a small key on a chain.

Another excellent source of news from NK is The Diplomat and again this site specialises in news from Asia and is often backlinked by other news sites as a reliable source, wherever that is possible of course. 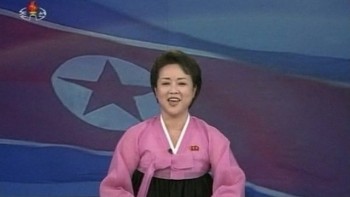 Try as I might, I haven’t been able to actually watch NK TV live through sites that purport to stream live TV from there and neither do I have a satellite dish, so the best I can offer is a taste of the Stalinist regime from a YouTube contributor.

On watching this, at least one gets a small flavour, albeit of raw and merciless propaganda and I can’t help thinking of One Flew Over The Cuckoo’s Nest set in an Oceania landscape, where everything is definitely not what it seems. 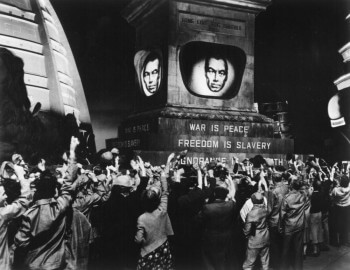 For a vast collection of North Korean propaganda, try the Korean Central Television Channel at YouTube and wonder what it would be like to stroll around through clapping and adoring crowds, followed by lapdogs scribbling feverish notes into their little notebooks.

Again,live radio is not easy to come by online. I have a short wave radio which picks up some patchy sound but in the meantime, try a few sites that have recordings of some short wave transmissions:

I’ve intentionally tried to steer clear of the horrors that the North Korean regime has inflicted upon its people over the years. The barbaric executions, the torture and inhumane treatment of innocent people in a country where a generation will know no other way of existence (which they neither asked for nor elected) and be so indoctrinated that they will see their leaders as benefactors and saviours of their culture as opposed to the monsters that they really are.

All the links referred to here appear to be safe and I’ve visited all of them and many more. However, it’s advisable to be very wary of North Korean sites that try to download plugins or any other additional software such as media players. 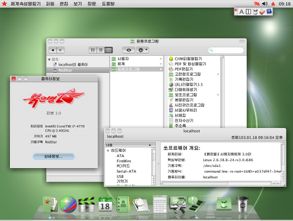