While I live and garden in the Desert Southwest, I do not have a landscape studded with a lot of cacti.  I do however, have a few favorites that add beauty to my garden.

The cactus above, is a Mexican Fence Post (Pachycereus marginatus).  The reasons that I include this cactus in my garden is that I love its columnar shape that add texture.  I also like the contrast between the green flesh and white margins.  Perhaps that best thing about this cacti, is that its thorns are rather small and are only found on the white margins.

Earlier this year, our neighbors had her front landscape redesigned.  One of the plants ton the plant list was a Mexican Fence Post.  But, like many succulent plants, buying one from the nursery that was large enough was going to be very expensive.  I knew that our cactus had plenty of arms to spare and so I offered our neighbors a cutting from our cactus.

Earlier this week, I wrote about “How to Create More Cacti From One”.  Well, this is how we used our existing Mexican Fence Post cactus to create a new plant for our friends.

First, we selected a good arm of the cactus to cut.  Then I used a thick layer of newspapers and gloves to grab the cactus with.  Newspaper can help protect you from thorns – gloves won’t.  Pieces of rug are also helpful in handling cacti.

We made the cut at the base using a pruning saw.

Then we loaded the cactus cutting onto a wheelbarrow for the journey over to our neighbor’s house (my husband and daughter assisted us in moving the cactus cutting).  Cacti are very heavy due to the amount of water that they store inside.

Read More :   Nuthatch vs Chickadee: How to Tell the Difference 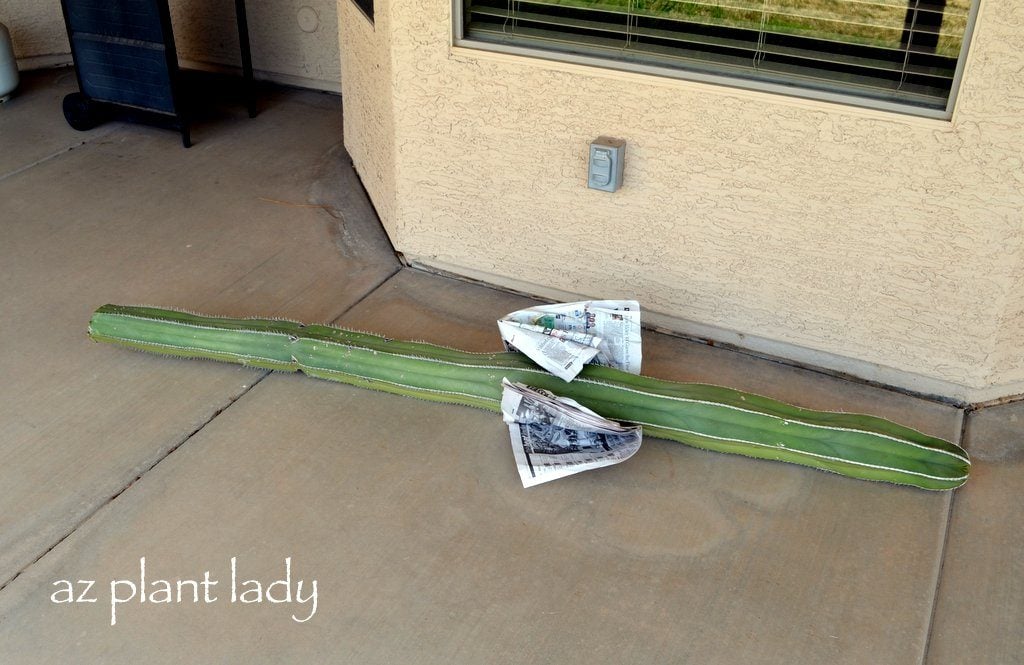 The cactus had to be kept in a shady, dry spot for 1 – 2 weeks so that the cut end could callus over.  If planted too soon, cacti can get rot and die.  It doesn’t hurt them to rest in the shade for a couple of weeks because they live off of the water stored inside.

After 2 weeks, it was time for this new cactus to be planted.

After planting, it is important not to water it for a month.  The reason for this is that it is very easy for cacti to rot if the cut end hasn’t healed (formed a callus).  After a month has passed, it can be watered monthly.

This new cactus has been in the ground for 5 months now and is doing great.  Soon, new arms will appear on the bottom.

As for my ‘parent’ cactus, you can hardly tell that we took a cutting from it…

However, if you look closely, you can see where it was cut on the lower right.

Five months later, you can see where the cactus arm was cut and how it has healed and callused over.  Do you see the circular ring inside?  Those are the ribs and are what help support the cacti.

You can see the new baby arms growing from the base of my cactus – if you look at the earlier photos of my Mexican Fence Post cactus taken in spring, they baby arms weren’t there.

As you can see, we will be able to provide another cutting to a friend in need in the future.

How about you?  Have you shared a plant from your garden with a neighbor or friend?

Attract Titmice to Visit Your Backyard

A Chic Chick’s Guide to Birding

The Ultimate Guide to Growing Milkweed Plants for Monarchs

Decorate Your Christmas Table Via the Produce Aisle